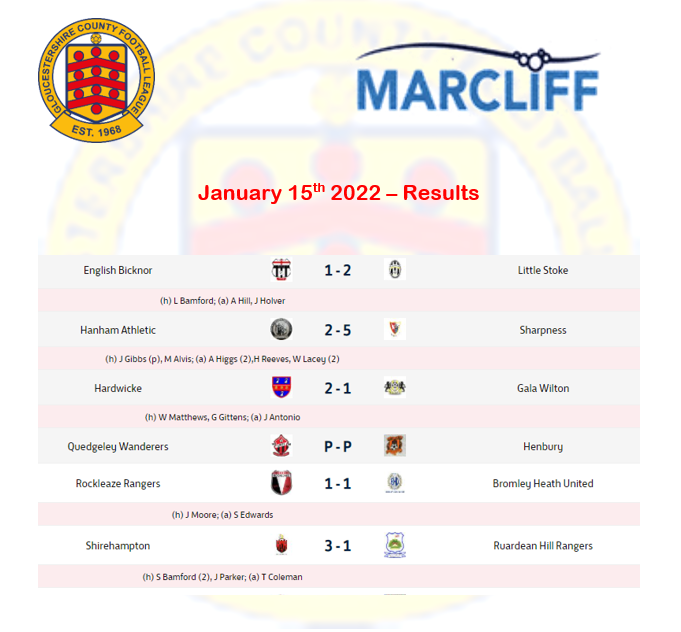 With Wick not playing today it gave leaders Shirehampton chance to open up a 6-point lead at the top of the table. Sharpness however, moved into third place with a comfortable win at Hanham Athletic.

In the local Gloucester derby between Hardwicke and Gala Wilton it was home side who took an early two-minute lead. A Gala attack was broken down by left back Jordan Dowdeswell who then raced down the wing and centred to Will Mathews to power his header into the Gala net. Two minutes later a Hardwicke attack on Gala’s goal saw Freddie Humphries strike the ball towards an empty net but it was cleared off the line by Callum Thomas. The home side were clearly keen to extend their lead and on 30 minutes Pat Vernall’s placed shot was steered around the post by Gala keeper Lewis Skyers. Just before half time Hardwicke were awarded a penalty when winger James Ratcliffe was brought down. Will Mathews fired the ball low and hard to the left of the goal but keeper Skyers made an excellent save. Hardwicke went into the changing room at half time feeling they should have more reward for their first half dominance. After 70 minutes Ben Sluman of Gala was sent to the sin-bin. Hardwicke took advantage of the additional player and James Ratcliffe crossed the ball for Skipper Glen Gittins to head past the stranded Skyers. Gala came back into the game and almost pulled one back when a cross from Dan McNally was headed over the bar by Martin Smith. Gala did eventually pull one back in the final minute when Jon Antonio scored to make the final score 2-1 to Hardwicke

Hanham Athletic were unable to stop Sharpness as they went down to a 5-2 home defeat. Will Lacey opened the scoring for the Sharks on 25 minutes, but the home side hit back just before the break with a goal from Mike Alvis. Will Lacey then netted a second. Alex Higgs scored again on 49 minutes to give them a 3-1 lead. Harrison Reeves netted number five in the 50th minute after a scramble in the Hanham goalmouth. Alex Higgs grabbed a second for himself to make it 5-1 and with just 5 minutes to go Hanham’s Joss Gibbs scored from the penalty spot to make the final score 5-2 to Sharpness.

English Bicknor suffered another defeat this time going down 2-1 to today’s opponents Little Stoke. Stoke took the lead on 20 minutes with a goal from Alex Hill. With the home side having plenty of possession they eventually equalised when Jasper Cramp scored. The home side had a great chance to take the lead from the penalty spot, but Lewis Bamford’s spot kick was well saved by the Stoke keeper. Stoke took all three points when they broke away late on and Jaidon Holver netted to make the final score 2-1 to the visitors. 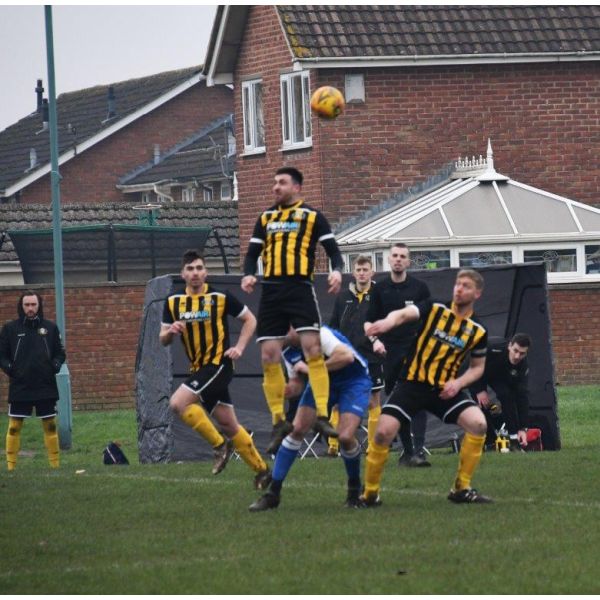 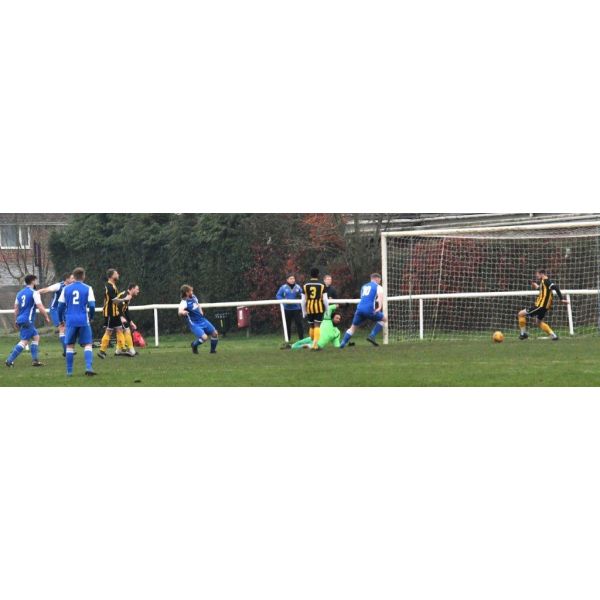 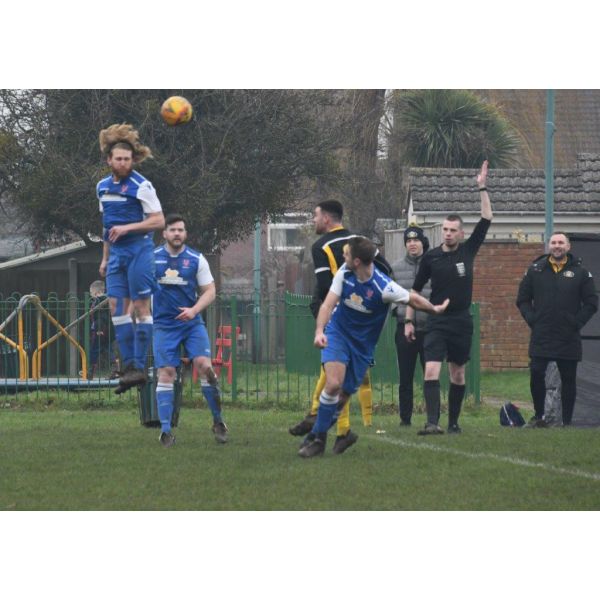 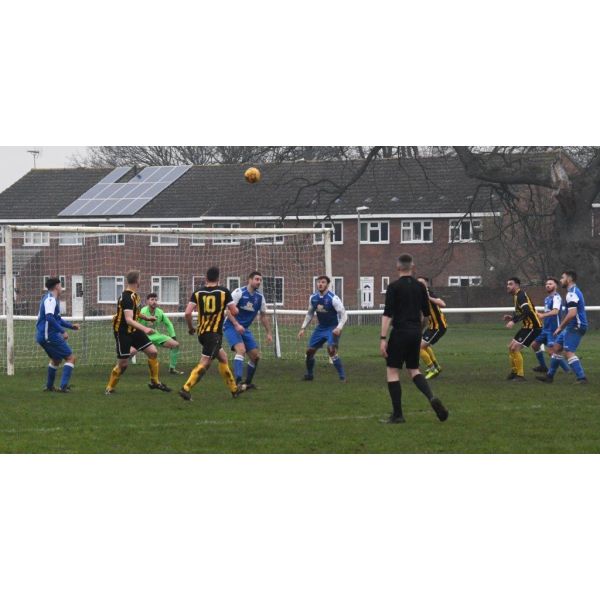 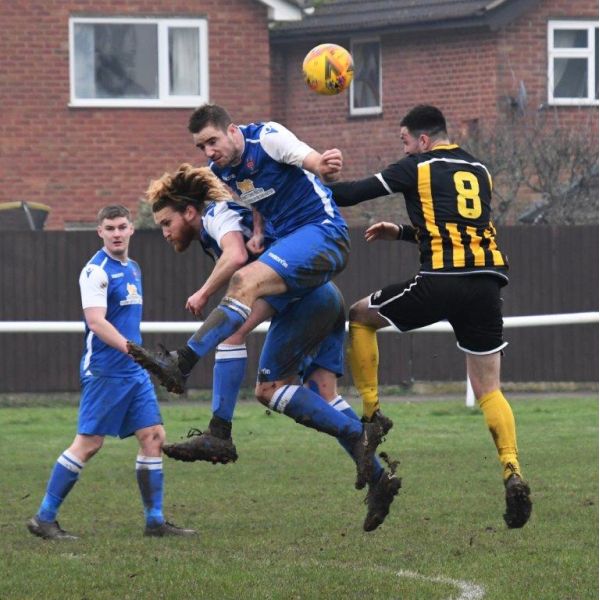 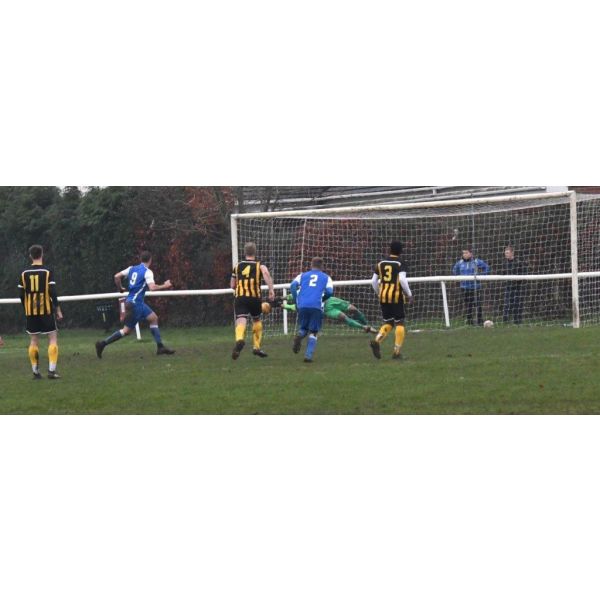 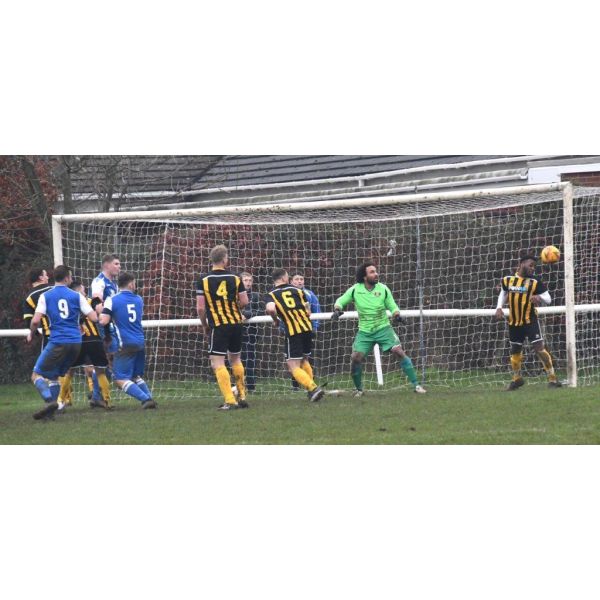 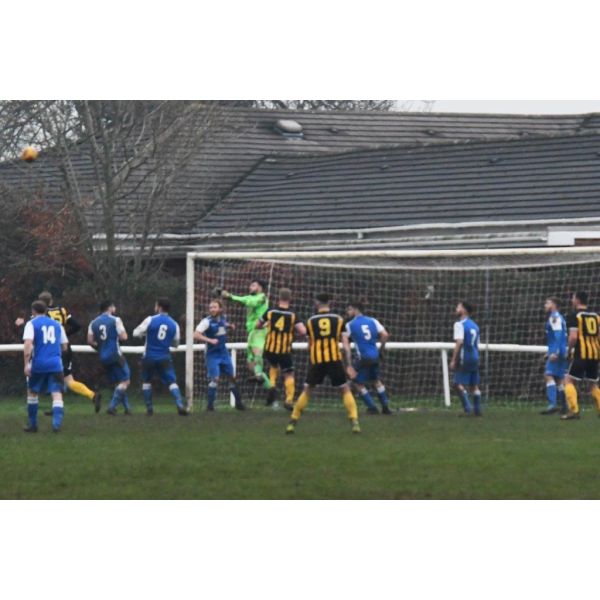 The game between Rockleaze Rangers and Bromley Heath United finished all square after a 1-1 draw. A lot of this game was played in midfield with the visitors shading possession in the first half and the home side shading it in the second 45 minutes. Dan Webb was unlucky on 19 minutes after some good play between him and Peter Ireland with Webb’s curling shot striking the upright. For the visitors the two Nurse brothers gave the home side some anxious moments but never managed to break through. On 48 minutes Dunning in the home goal saved well with his legs from an Alvin Nurse effort and Dunning brought off another good save from a Withey drive on 55 minutes pushing the ball around the post for a corner. Rangers were gifted a goal on 68 minutes with an awful mix up in the Bromley defence that allowed Jay Moore a clear shot into an empty net. Just when it looked as though the home side were going to grab all three points Bromley’s Sam Edward hit a tremendous shot from the edge of the box that flew past Dunning in the Rangers goal to make it all square.

Shirehampton recovered from a goal down at half time to extend their lead at the top of the table to six points after seeing off a dogged Ruardean Hill Rangers side. The home side should have been a couple of goals ahead before a long delay in play due to a serious injury to Luke Brown. When play did resume Shirehampton were punished for their wastefulness in front of goal as in the ninth minute of first half injury time great work down the left from Tommy Coleman was rewarded as he broke the offside trap and slotted the ball past Matt Turner to give Ruardean the half time lead. Shirehampton came out in the second half with an increased determination, and they were level after 54 minutes when Scott Bamford turned brilliantly and tucked the ball into the bottom corner. Bamford turned provider 4 minutes later when he cut in from the right and delivered a perfect ball into the 6-yard box for Jack Parker to turn home. The outstanding Bamford then secured the points with quarter of an hour to go when he turned his man again and finished into the bottom corner this time with his left foot. 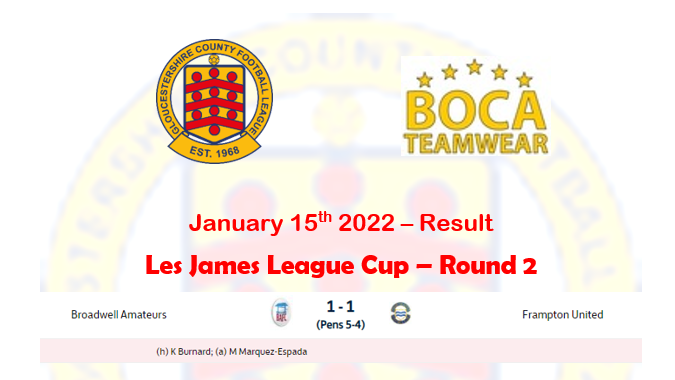 Broadwell Amateurs were drawn against Frampton United for this quarter-final tie. The home side ran out winners from the penalty spot after the final score had finished 1-1 in the 90 minutes. Both sides equalled each other out for a lot of this game and it took until the 35th minute before the first attempt on goal which was a great effort from Ryan Vincent that Watkins in the home goal pushed around the post. On 42 minutes Frampton’s Andy Cox carved out a space for himself to shoot on goal but Watkins was there again to push the shot wide of the goal. On 50 minutes a break down the right by the home side saw Frampton’s keeper Fraser Wilson in action to prevent a goal. Ryan Vincent then struck the crossbar on 70 minutes for the visitors but the ball went out for a goal kick. Just a couple of minutes left and Frampton took the lead when Ryan Vincent chased the ball down the right flank crossed into the box and Manolo Espada powered his header past Watkins. Frampton’s hearts sunk then right on 90 minutes from a Jamie Powell free kick Kristian Burnard rose above everyone to head the equaliser past Wilson in the Frampton goal. In the penalty shootout Broadwell’s keeper Watkins brought off two great saves to see his Club into the Semi-final.

ROCKLEAZE Rangers’ watchful boss Peter Bradbury is urging his players not to take their eyes off the ball now that they are in a much stronger position to kick on.

The improving Hillside Gardens outfit have responded determinedly to a truly frustrating series of results which had them staring hard at dangers lurking deep in the Marcliff Gloucestershire County League basement, before four wins from five appearances signalled a tangible upturn.

A 2-0 away defeat by an ever-competitive and high-riding Frampton United unit at the weekend provided a disappointing setback, one Bradbury is eager to hit back from straight away in the bid to keep the climb continuing.

Ninth-placed Rockleaze entertain local rivals Bromley Heath United on UWE’s Hillside 3G in Hambrook tomorrow (3pm), whilst a cautious, yet encouraged, Bradbury spelled out: “We’re a few wins away yet from being completely comfortable; but we’re in a healthier position, for sure.

“There were genuine reasons for our struggles over the early part of the season. Our performances were pretty good and competitive in the main; but we were light upfront due to injuries to recognised strikers, and people were playing out of position. That sort of cocktail means you’re not going to create and score goals as you had been.

“We’ve been getting the rub of the green a bit more of late too. It’s also been a massive bonus getting Dan Webb (striker) back to us. Although he’s not been involved in every game since his return from Cribbs, he was instrumental in our 3-2 and 5-1 wins over Hanham and English Bicknor with one and two goals in each game respectively.

“What it’s shown is we’re not overly reliant on Dan, as when he didn’t play in the Broadwell and Hardwicke games, Zayd Alli and Sam Bailey, normally an attacking central midfielder who has been playing upfront and chipping in with goals regularly, stepped up to the plate with important goals in the two victories.”

Bradbury continued: “Generally we’ve tried to be more proactive from the very start of games, to press and get on the front foot fast.

“We’ve also tightened up at the back, conceding fewer goals as a result; and getting lads like Pete Ireland and Toby Sharpe back into our midfield and defence has helped after so much chopping and changing.

“We’ve not really replaced Nick Jones since he left us for Cribbs; and while Henry Smith and Liam Henderson both did well filling the breach, it’s good to have the sort of consistency at left-back Toby provides.”

Meanwhile, Shirehampton, held 1-1 at home by Henbury in midweek, nonetheless continue with their efforts to cement pole position in the table as Ruardean Hill Rangers visit the Creek for a 3pm tussle.

Bottom sideHanham Athletic aim to make it morale-boosting back-to-back wins in the ongoing fight against relegation at home against fifth-placed Sharpness (2pm).

In-form Henbury, undefeated in their last four league and county cup appearances, are at Quedgeley Wanderers, while Little Stoke go to English Bicknor for an important bottom five bout (both 2pm starts). 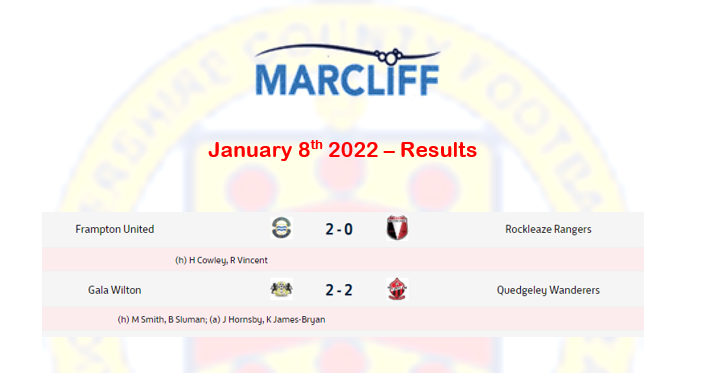 Just two fixtures survived the overnight heavy rain. Frampton United’s game at The Bell Field went ahead against Rockleaze Rangers with a 2-0 victory for the home side. Fin Blythe’s 14-minute free kick was well saved by Dunning in the Rangers goal, but a mix up in the 32nd minute in the Rockleaze defence allowed Harvey Cowley the chance to steal the ball and put United ahead. United’s Matt Cook then had his shot on target in the 52nd minute deflected away for a corner. Rockleaze then had their first effort on goal in the 60th minute cleared off the line. 5 minutes later Manolo Espada squandered a great chance to score blasting the ball high over the bar after a great ball from Ryan Vincent. The home side went 2-0 up on 71 minutes when they capitalised on a mistake by Ranger’s keeper Dunning failing to hold the ball and Ryan Vincent tapped home. Rangers were unlucky in the 74th minute when following a corner Dan Webb’s header on target was cleared off the line. Webb had another great chance for Rangers on 84 minutes when he was put clear on goal but failed to beat home keeper Fraser Wilson.

Gala Wilton v Quedgeley Wanderers was the other fixture that went ahead today with Wanderers getting the ball into the Gala net after 6 minutes but it was ruled out for offside. A 12-minute 25-yard thunderbolt from Gala’s Craig Howell rattled the Quedgeley crossbar on 12 minutes. It was the visitors who took the lead on 32 minutes when they hit Gala on the counter attack, Henry Birkett sent a long ball up field and Kyle James-Bryan finished the job off. 2 minutes into the second half Craig Howell was at it again when he crashed a free kick against the Wanderers upright. Gala almost levelled the score in the 49th minute after Ryan Dobbins and Martin Smith interchanged passes with Dobbins shot only parried by the Wanderers keeper and Ben Sluman following up also saw his effort saved. Quedgeley moved into a 2-0 lead on 76 minutes again from a counter attack with Jack Hornsby getting the goal. Gala pulled one back in the 84th minute with a Ben Sluman strike and with just 3 minutes left on the clock the home side salvaged a point from the game when Martin Smith scored at the back post from a Ryan Dobbins cross.