A couple of surprises in the first round of the Les James League Cup as Rockleaze Rangers were beaten at home by Hardwicke and Sharpness were held to a 0-0 score line and went out 2-4 on penalties to Ruardean Hill Rangers.

Wick scraped through with a very late goal at Patchway Town. The home side had several early chances but Wicks keeper Ashley Wintle made several saves to deny Phil Vice and Jacob Cox. However, Wick did have the ball in the Patchway net on 26 minutes but it was eventually ruled out for offside. Patchway were unlucky and might have taken the lead but for a great clearance of the line by Ryan Ross from a Jacob Cox shot. The game was a fairly even contest throughout but in the 75th minute Ollie Bacon made a superb clearance off the line from a Mike Hardiman shot on goal. The game looked as though it may have to be decided from the penalty spot as Wick were pushing hard for the winner and in the 93rd minute a free kick sent in by Jordan Yeo was punched away by keeper Burgess but the ball was pumped back in and Ross Woodford headed home.

Broadwell Amateurs march on into the second round with a 3-1 win at home to Quedgeley Wanderers. Liam Thomas gave the home side the lead inside 3 minutes collecting the ball on the right then cutting into the box before driving a low shot just inside the Wanderers post. Thomas was on target again in the 19th minute when a high ball found him free to slip past two defenders and drive the ball in. On 25 minutes Aiden Creighton saw his shot really well saved by Wanderer’s keeper Kieran Derbyshire. Wanderers were limited to just one shot on target in the first 45 minutes a effort from Sean Lawson. Early in the second half Liam Thomas was upended in the box but his penalty kick went straight at keeper Derbyshire who parried the ball but Aiden Creighton was following up and slipped the ball home. Trailing 3-0 Wanderers then had their best spell of the game and in the 70th minute a corner found Daniel Lander free on the far post to volley home.

Rockleaze Rangers suffered their second defeat in row this time going down 2-0 at home to Hardwicke. The home side had an early chance to go ahead but Mike Perham’s shot struck the crossbar in the 13th minute. Hardwicke went ahead in the 31st minute with a goal from Shane Thorp striking the ball past Adams from around 12 yards following a corner. Into the second half and on 61 minutes Adams was in action again to save well from another Forbes strike on goal. At the other end Hardwicke’s Ollie Hall also brought off a great save to deny Marcus Williams. Jordan Dent then missed an open goal which would have seen the score-line change to 1-1 in the 70th minute. Then just 5 minutes later Hardwicke won their place in the second round when Sean Clarke neatly lobbed the ball over keeper Nick Adams.

Gala Wilton are looking forward to the next round after winning by two goals to nil against todays visitors Bromley Heath United. The only real chance was an effort from Sam Webb a header that stuck the cross bar for the home side in the first 45 minutes so 0-0 at the break. Gala broke the deadlock on 52 minutes when a free kick from Sam Webb found Martin Smith to drive his shot under the Bromley keeper. Just a couple of minutes later it was 2-0 a great through ball from Martin Smith found Bradley Loveridge to round a defender before sliding the ball home.

Shirehampton’s Joe Harvey’s hattrick gave them passage into the next round at English Bicknor. It took just 10 minutes for the visitors to open the scoring a corner being headed home by Harvey. Then 5 minutes before the break the home side lost the ball in midfield and Harvey chipped the keeper to make it 2-0. Bicknor lost the ball again in midfield in the 61st minute and a thunderbolt shot from Harvey made it three nil and he completed his hattrick. The home side never gave up and were rewarded for their hard work in the 68th minute when Jordan Heales found Blaine Smith to reduce the score to 3-1. The home side had further chances and struck the crossbar but were unable to find a way through.

Little Stoke cup winner’s a few seasons ago were drawn at home to Hanham Athletic for this first round. Stoke went ahead on 9 minutes from a defence splitting pass to Aaron West to beat the Hanham defence and run clear to lob the ball over the advancing keeper. Both sides had a penalty shout turned down in the first 15 minutes the referee having none of it. Second half saw a good chance for Stoke when a cross into the box by Ethan Moore found John Pugsley clear on goal but his shot was brilliantly saved Sam Brown in the visitor’s goal. A through ball from Aaron West to Lucas Hart was again well saved by Brown. On 75 minutes a delightful run down the flank by Lucas Hart saw his cross over hit but it was laid back to Moore whose shot was well saved by Brown. Stoke made sure of their place in the next round in the 85th minute when Jude Scott’s through ball found Ethan Moore to finish it off.

Henbury’s chance of playing in the second round was scuppered by Frampton United with a 3-1 score-line. A steady opening but Manolo Espada had the first chance for the visitors on 7 minutes but shot wide. Home keeper Theo Hutchinson then saved well from a free kick. Henbury’s Andy Dickinson then saw his shot well saved by the Frampton keeper Aaron Taylor. A break down the right by the home side and a cross in saw Jenson Manning fire wide of the target. 20 minutes saw a Manolo Espada free kick fly high over the Henbury bar. On 28 minutes poor defending by the home side allowed Joe Wilton to run clear to open the scoring for Frampton. At the other end Dickinson’s run down the flank and a good cross found Kane Manning but his shot went well over the bar. Frampton were awarded a penalty 5 minutes before the break and Stuart Maule had the chance to make it 2-0 from the spot, Hutchinson saved the penalty then saved the follow up which struck the crossbar before Frazer Wilson finally got the ball into the Henbury net. A disaster in the 48th minute when both Tyler Burgham-Wilson and keeper Hutchinson getting into a right pickle before the keeper gave away a penalty. Frampton’s Manolo Espada took the penalty and gave the keeper no chance for a 3-0 lead. The home side gave themselves some hope in the 65th minute when a break down the right by Dickinson saw his cross take a deflection and the ball ran through to the unmarked Sam Degg to slip the ball into the net. The home side then rallied and just 2 minutes later Degg had a glorious chance to make it 3-2 but shot wide. Kane Manning then worked his way through but could not get his shot past Taylor. The last chance fell to Frampton but Steve Jackson’s shot struck the upright.

A goalless draw at Sharpness who entertained Ruardean Hill Rangers in this first Round. It seams a tail of missed chances from both sides in the first 45 minutes either failing to hit the target or shots being well saved by the keepers. The second period saw plenty of action from both teams but it was the same old story not being able to get the ball past either keeper or shots being off target. After 90 minutes the game went to penalties to decide the outcome and Ruardean Hill Rangers will be in the next round winning 4-2 on penalties.

The Les James League Cup is sponsored by Boca Teamwear 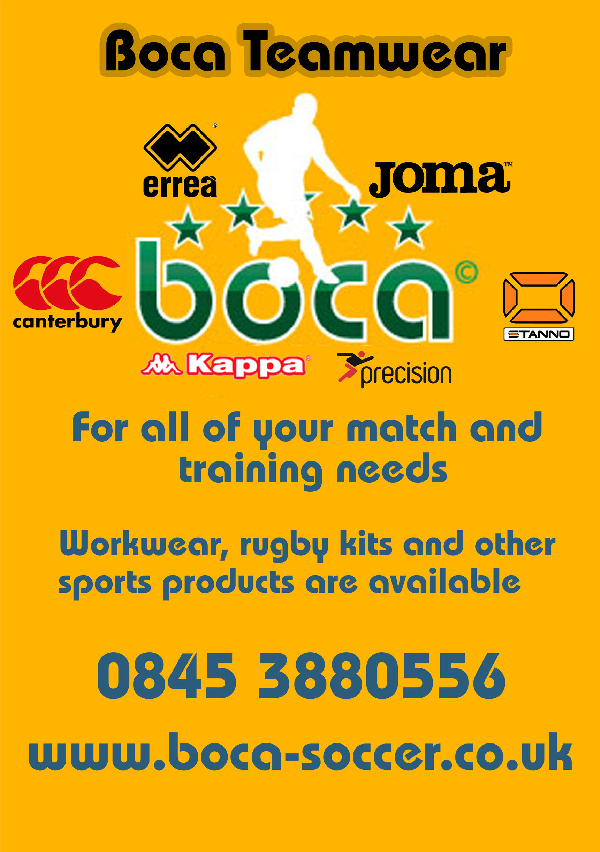 The First Round draw for the Les James League Cup sponsored by Boca Teamwear is as below.